Coming of Age: Writing for Teens and Tweens 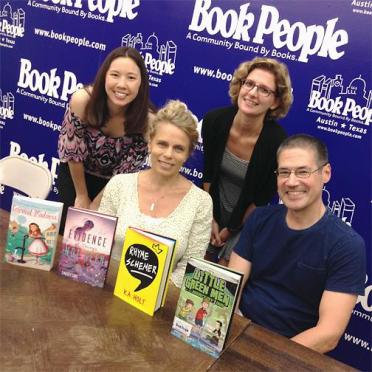 Our theme for this month’s Writers’ League of Texas Third Thursday event was YA and middle grade fiction. What better time to talk about teens and tweens than when they’re about to head off to school? We had a few distinguished young adult and middle grade authors on our panel, including, Kari Anne Holt. Kari Anne is a middle grade novelist who has written Brains for Lunch, which received a starred review in Publisher’s Weekly, and was highlighted on the Texas Library Association’s Annotated Lone Star Reading List for 2011. She also wrote Mike Stellar: Nerves of Steel, which was a nominee for the 2014 Connecticut Library Association Nutmeg Book Award, the 2013 Maud Hart Lovelace Award, a Scholastic.com Great Summer Read for Tweens, and was named a Random House Fresh Fiction from New Voices book in 2009. The panel also included Lindsey Lane, a distinguished playwright who is celebrating her debut young adult novel, Evidence of Things Unseen¸ which will be released in September. Next on the panel was Greg Leitich-Smith, an award-winning author who hails from Chicago but now lives in Austin, and writes middle grade/tween novels including Ninjas, Piranhas, and Galileo, which was the Parents’ Choice Gold Award winner and Junior Library Guild Selection. Our fourth panelist was Jo Whittemore, a tween humor novelist who wrote Front Page Face-Off and Odd Girl In.

After a few WLT announcements, the panel began with the authors describing what type of writing they do and why they write middle grade or YA. Kari Anne started off by saying: “I write what I want to write and hope someone wants to publish it.” She continued to say that she’s interested in characters who are searching for themselves or characters who at first want to fit in, but in the end, find out who they really are. Lindsey said she was interested in the question: “What would happen if…?” and how it affected her characters’ lives. All the panelists agreed that they wrote YA or middle grade because they related to young people better than they related to adults. Kari said that while trying to write adult fiction, the voice of a ten-year old boy would emerge no matter how hard she tried to write in an adult voice, so she decided middle grade was the direction her writing needed to take.

The authors continued by giving a few tips to aspiring YA and middle grade authors. Greg talked about the importance of reading, and how he has always been an avid reader. Jo, on the other hand, said she didn’t read much when she was younger but now finds inspiration for the young voice she writes in, by watching kids’ shows on Nickelodeon and Disney. Kari talked about the freshness of YA and middle grade, and how writers of the genre should be careful not to date themselves when writing. Lindsey said to ask yourself, “What is your character lying about?” and explained that characters with lies and/or secrets are more compelling than ones without. The authors seemed to agree that as YA and middle grade writers, you have to be listening and consuming youth culture constantly in order to create believable characters. All four panelists touched on the topic of “gatekeepers,” (librarians, teachers, and parents), because these are the people who decide what young audiences are going to read.

Next, the panelists talked about the writing process. For Jo, (and as it turns out, most of the panelists) taking a shower is a meditative process that allows a writer to think about their story, without distraction: “I take a lot of showers; it’s like being in the womb again…Everyone should shower generally, but it’s a retreat from the world. I will stand there and just think,” Jo said half-jokingly. Jo continued to talk about how she abides by a strict outlining process, while on the contrary, Kari said she prefers to fly by the seat of her pants and not get bogged down by strict outlines. Lindsey was a balance between the two, whereas Greg had a rather complicated “multiple proto type” procedure of writing that seemed unique to his own writing process.

After several other questions regarding series books, the genres, and market, Jo made a salient comment about both genres that spoke miles for what it means to be a YA or middle grade author: “Middle grade is how the world affects you; YA is how you affect the world.” For more discussion, and to get your writing and publishing questions answered by authors and folks in the industry, stay tuned for our next Third Thursday event!

Jourden Sander is a University of Texas senior, majoring in English with a minor in Rhetoric and Writing. While studying at UT, Jourden edits for Spoon University Texas and acts as a consultant for the University Writing Center. In her spare time she enjoys creative writing, hot tea, playing tennis, and walking her corgi.