DR. MUTTER’S MARVELS: A TRUE TALE OF INTRIGUE  AND INNOVATION AT THE DAWN OF MODERN MEDICINE

Published in 2014 by Gotham Books. 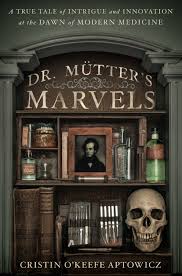 As a general class of people, we surgeons are a handful. Impatient, abrupt, and inescapably prone to profanity, we function in an independent solar system where the world orbits around our own self-centered axis. We learn through Cristin O’Keefe Aptowicz’s Dr. Mutter’s Marvels, however, of a surgeon who was cut from a different cloth in this panoramic and insightful window into nineteenth century medicine.

In 1841, the Board of Trustees at Jefferson Medical College in Philadelphia made the highly controversial decision to vacate all the chairs of the medical school and replace them with an entirely new faculty. Some of the city’s best-known physicians were recruited, men who were both accomplished technicians and academicians with numerous publications and textbooks to their credit. And then there was Mutter, a thirty-year-old dandy sporting patterned vests, silk suits and matching silk socks with an undersized curriculum vitae. But, thanks to the sorts of political missteps endemic to institutions of higher learning, the relatively inexperienced Mutter took his seat as the Chairman of Surgery alongside his more vaunted colleagues.

From the first day of class, Mutter bucked the status quo. In the lecture hall he arrived before students and greeted them in his “wonderfully musical voice.” He further veered from tradition by actively engaging with students by posing questions in keeping with the Socratic Method, a first among his colleagues.

Mutter’s maverick streak was writ even larger upon the canvas of patient care where he was known for his methods of preparing patients both mentally and physically for operations. The young surgeon not only explained the planned procedure in detail but he also showed patients the instruments he would use and groomed a body part for surgery by massaging and touching it with instruments. Today’s patients, accustomed to reality TV and YouTube videos expect and indeed, clamor, for such explanations and demonstrations, but, as Aptowicz explains, in the 1800s “professional distance” was the rule and Mutter’s techniques were viewed askance by his fellow faculty members.

Perhaps the most poignant episode Aptowicz recounts is that of the plight of nineteenth century women who were forced to dress in “layer upon layers of cotton, wool and silk and pieces of clothing held snugly to the body with tightly bound ribbons and laces.” This left them uniquely vulnerable to clothing fires from open fireplaces and the resulting catastrophic facial disfigurement. Mutter devised an operation to release the thick webs of burn scar that developed between the chin and the neck by swinging a swath of skin and subcutaneous tissue from the shoulder up to the face. In a matter of hours, he was able to transform the lives of women who were previously deemed “monsters” condemned to a life of shame and seclusion. This same technique, known as the supraclavicular artery island flap, is still in use today.

It is a shame that one so compassionate, so innovative and so technically gifted died at the age of 47 but, as Aptowicz demonstrates, Mutter left a legacy far larger than the collection of oddities to which his name is attached. His good works outlived him in the lives of the patients he saved, his novel techniques and, most importantly, through a generation of physicians he trained who built on his principles and used them to propel the medical world forward.

Catherine Musemeche is a pediatric surgeon and the author of Small: Life and Death on the Front Lines of Pediatric Surgery, published by The University Press of New England.