By Carmen Boullosa
Translated from the Spanish by Samantha Schnee

Published in 2014 by Deep Vellum Publishing. 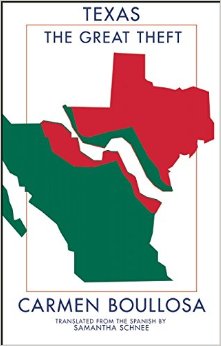 In the first pages of Carmen Boullosa’s powerful yet whimsical novel Texas: The Great Theft, we are introduced to dozens of characters – butchers and lawyers and chicken dealers and grocers and judges and escaped slaves and housemaids and vaqueros, Mexicans and Americans and Indians and Africans and Germans – everyone trying to survive in the precarious, often violent territory between the Rio Bravo and Nueces rivers. It’s a place bursting with stories, a place where every perspective – no matter how small or marginalized – has something to add to the conversation.

The story begins with an insult. It’s 1959, in Bruneville, and “Sheriff Shears spits five words at Don Nepomuceno: ‘Shut up, you dirty greaser.’” Handsome, wealthy, and respected, Nepomuceno – like many Mexicans north of the new “border” – was granted a kind of second-class U.S. citizenship in 1948, during the titular “Great Theft,” when his land was stolen by the Texas government. Before long, news of the sheriff’s insult has traveled far and wide, inflaming racial tensions along both sides of the Rio Bravo – “In Galveston, no sooner has the phrase made it off the boat than it doubles back southward, finding passage on a steamboat that’s just arrived from Houston and is headed to Puerto Bagdad, Mexico, almost directly across the river from … Bruneville’s seaport.”

Boullosa’s world is one where relationships are transactional, the laws are only useful insofar as they create capital, and personal identity is as fluid as our disputed borderland setting. Survival often means profiting from another’s weaknesses, or exploiting the jurisdictional loopholes afforded by the border. “Mexico forbids [slavery] on principle, while Texans deem it a God-given right.” So slaves escape into Matasánchez, Mexico, where they will be free – only to be caught and returned … for a price. The lawyer Stealman “follows the law to the letter when he’s doing business with Anglo-Saxons, unless he has a good reason not to, of course.” The border also encourages a horrible sort of split personality, “because [people] come to satisfy appetites for things they wouldn’t think of even trying in the north.”

A single name here can imply an entire history of abuse, of crimes and insults forgotten or ignored. In one scene, we meet a group of Mexican spies – the Eagles – playing a subversive game of charades in a Bruneville bar: “Carlos the Cuban shuffles the deck … He deals and they quietly begin to speak of crimes. Since the Café Ronsard has begun to fill up, he sets the tone: they won’t talk about anything new and they won’t go into details … Carlos names the first atrocity. ‘Josefa Segovia.’ Ronsard immediately responds. ‘1851.’ … How the Eagles laugh. They smile in bitter revenge, as if saying these names has repaired these offenses, as if it has given them pleasure … They sit there making allusions and obscure, cruel jokes aloud yet no one understands them, they’re speaking in code.”

As tensions build, Nepomuceno flees south into Mexico, preparing to invade Bruneville and reclaim both his land and his honor, Boullosa invites us to identify with every creature encountered along the way. We are privy to the secret dreams of a talking cross, a dying horse, a bullet shattering a Mexican’s skull, a buried corpse, an icaco tree, even that tree’s shadow. In the end, Boullosa’s humorous, offbeat tale makes the case that – no matter how small or marginalized, no matter where it exists in relation to some arbitrary geographical or racial border – every perspective matters.

David Eric Tomlinson has been a member of the Writers’ League since 2013. He was born and raised in Oklahoma, educated in California, and now lives in Texas. You can learn more about him at www.DavidEricTomlinson.com

One thought on “MEMBERS REVIEW”