Beginning Again: How to Start (or Restart) a Writing Project 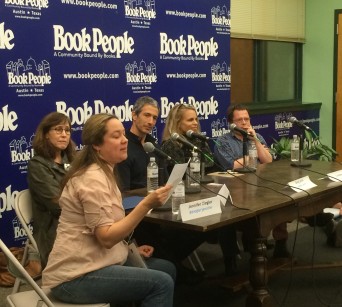 by WLT Board President Tony Burnett.

The inaugural Third Thursday Panel for 2016 began with an appreciative shout out to legacy and lifetime members of the Writers’ League of Texas. This being the League’s 35th year of service to the literary community of Texas, each Third Thursday in 2016 will honor folks who have volunteered time and services to promote the organization’s mission.

With a New Year’s theme of resolution in mind, the all-star panel’s topic was “Beginning Again: How to Start (or Restart) A Writing Project. Moderator Jennifer Ziegler led the discussion by first asking how the featured panelists came to be writers.

Suzy Spencer, the only nonfiction writer on the panel, initially wanted to be a photographer. The only path Baylor University offered for photography was through the School of Journalism. Once introduced to writing she saw a niche in fiction, a stylistic mix of Jackie Collins and Larry McMurtry. Unfortunately the world wasn’t ready for that combination. Her training in journalism won out with a succession of true crime novels followed by Secret Sex Lives, an award-winning memoir about her research into the fringes of American sexuality.

Panelist Greg Levin, author of the novel, The Exit Man, claimed to be born with the inability to shut up. When people quit listening to him talk incessantly he figured if he put his thoughts on paper folks might pay more attention. He credits Woody Allen as being his inspiration for melding humor with more serious literary topics.

By the time she was 12 years old Lindsey Lane felt she was living in an older world that would benefit from her enlightenment. She began by writing actual letters that you put in the mailbox. No immediate gratification for this girl! Her first excursion into creative writing was as a playwright in the booming late 20th-century theater scene. As that scene folded she became a crime-beat journalist for the Austin Chronicle. As is typical of many children’s book authors, having children pulled her toward the genre. She is the author of the YA novel Evidence of Things Not Seen.

Edward Carey grew up in England where he attended the Royal Naval Academy. He was the shortest in his class, not imposing enough to be a naval officer. He went back to University to study theater and enjoyed every aspect of the craft. He concentrated on writing plays but his plays tended to have a cast numbering more than 30 and lasting 12 hours. The other downside was answering to so many people. He wanted total control over the story, hence he became a novelist, authoring the YA series, The Iremonger Trilogy.

Then Jennifer got down to the crux of the topic by asking, “When you begin a project what comes first?”

Edward, because he is also an illustrator, draws pictures of the characters. He prefers “settings that don’t exist” so he can make it up. Plus it saves time on research.

Lindsay’s works are dark. Her characters have done something bad. She asks, “What situation caused them to take this action? What happened that made it crash in that particular way?”

Greg swears frustration led him to “at least try” to write a book. He wakes in the middle of the night with “the character knocking on my head” saying “I want you to tell my story”.

Suzy’s inspiration is “the desperate need for money.” You have to love her honesty! She goes on to say that her books require “some element of insanity and some element of sex”, all the things she repressed growing up. Ideas come from various sources; strangers, her agent, even stories she’s followed on the news.

Jennifer asked the panelists about the writing process. Edward noted that he dove right in, saying it could be dangerous to spend too much time thinking about it. “At least get four or five chapters in to see where it’s taking you”. One of the major decisions is the narrative point of view. He writes his novel length works in the first person. “You have to get into the voice. Never plan too much.”

Lindsay preferred to tell herself the story. The first draft is a skeleton of what the novel will be. Then the work of “slowing it down, deepening it” comes into play.

Greg has to begin with a title, maybe not the final title, then he writes the back cover material. That said, he never knows the ending until the first draft is finished. He gets to know the characters, the characters write the story. “Let it run wild.” You can always go back and edit.

After trying her hand at fiction, Suzy was surprised her nonfiction characters didn’t take their own path. She credits that to the massive pile of research she does to prepare for the first draft. When she transcribes the many hours of interview tapes she begins hearing the voices and getting to know her subjects intimately. Jennifer asked how she knew when to stop researching and start writing, Suzy’s one-word answer: “deadlines”.

All of the panelists admitted to having abandoned a project at some point. Edward is back working on a project that he abandoned five years ago due to being overburdened by complex research. Lindsay says it’s healthy to “let things go” as she recently has. If it’s not working move on. Greg abandoned an earlier project because the protagonist was a writer and his first novel was about a poet. He felt it was too soon but may go back to the project later as many of his writer friends have encouraged. Suzy worked on a project spending hours of research and even getting the subject’s family’s permission and encouragement. When unable to place the finished product with a publisher she felt as though she let the family and the subject down. Though she regrets it, she made no indication she would pursue it further.

All the panelists suggested that new writers keep their efforts to themselves until they have finished the first draft of a project. Edward said to stay true to yourself. The more you share the story the more it dies or changes. Lindsay encouraged the writers not to criticize themselves and suggested when you have a first draft read it aloud to yourself before sharing it. She also recommended side writing to develop a character or when you get stuck in the story. Greg said if you love writing don’t share it until you have a final product. He doesn’t even share his draft with his wife until he feels it’s complete. Suzy agreed, “hold it close” but added “don’t give up”. Determination and perseverance often exceed talent.

The panelists fielded a few well-considered questions from the audience. Then there was cake for everyone.

Join us next Thursday at 7:00 pm on the third floor of BookPeople for “Fictionalizing True Stories: Mining Real Life for Plots and Characters” with panelists Charlotte Gullick, Varian Johnson, Ruth Pennebaker, and Mary Helen Specht. Hope to see you there!

Tony Burnett has been a member of the Writers’ League of Texas since 2010 and currently serves on the Board of Directors. His story collection, Southern Gentlemen, is available everywhere and his first full length poetry collection, The Reckless Hope of Scoundrels is set for a spring debut. He resides with his trophy bride, Robin, deep in the heart of Texas.