Writing About the Military 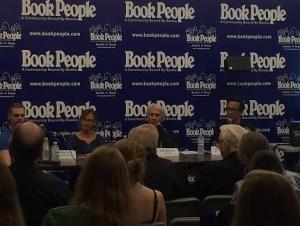 When Leila Levinson, author of Gated Grief, asked the audience at March’s Third Thursday whether they had a loved one who is a veteran, nearly every person in the room raised their hand. The military has a huge, broad impact on us and our families—but as Brandon Caro, author of Old Silk Road, mentioned, fewer than 1 percent of the population today has actually served in the military, even in the wake of some of America’s longest wars.

For Caro, it’s important for him to share his experiences as a Navy corpsman (combat medic) in the military through writing, first because writing is a personally satisfying pursuit, but also because people want to read these stories. And out of the small percentage of people who have served in the military, even fewer have shared their story. “And it’s a great story,” Caro said, “it seemed like a no brainer [to write about my experiences].”

Jack Woodville London, author of A Novel Approach, similarly has experience serving in the military as a U.S. Army Captain. London’s unique personal experience in the military allows him to write about things such as the problematic elements of the command structure in the military—something most of us don’t think to consider. “It’s what I know best,” London said, when asked how he started writing about the military. “You write what you know, and you go out and learn about what you don’t know.”

Research is one the most important aspects of writing, in general, but especially about the broad experiences of the military. Caro and London have firsthand experience serving in the military as a foundation, but for Levinson and Jonathan Wei, founder of The Telling Project, interviews become the core of their research. As Levinson puts it, “war is the story of all of our families.”  Levinson, the daughter of a WWII veteran, believes listening to veterans speak and tell their story in their own way is essential to the interviewing process.

Wei’s The Telling Project is a theatre piece that tells the stories, verbatim, of veterans. The stories are interwoven to create an emotional, personally charged narrative. The three-act act play structure works to combine the stories into a full arc with a beginning, middle, and an end—from entrance into the military, to basic training, duties stations and deployments, to return and reflections. “You have to let people talk, and let them encounter silence,” Wei says of interviewing. Interviewers, in Wei’s view, bring a lot of misconceptions with them, and it’s best to stay “objectively curious” and respond to the veteran’s story in an open-minded way, realizing the complexity of “trauma” and the military experience.

Writers will always grapple with research, and what shape that research takes can have many more faces than we anticipate. We persevere because we know all stories are important.

Join us at next month’s Third Thursday to see what our collective research tells us about the art of short story writing.

Kelsey Williams is a full-time bookseller, and part-time short story writer. She loves art, literature, and the little smiles people get when they text someone that they love.