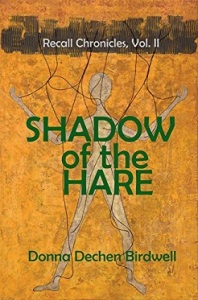 Published in 2016 by Wide World Home

Barring any Armageddon-like occurrence, extrapolate, if you will, 150 years into the future. If you are like Donna Dechen Birdwell, a seasoned anthropologist and social scientist, you will find yourself in the questionable utopia described in her series, The Recall Chronicles. But wait, centuries of experience tell us one person’s utopia is another person’s apocalypse, he who has the gold makes the rules, and there is always a subversive subculture. Just to make it interesting let’s assume that science has eliminated aging, but only if you so choose. There are trade-offs.

This second novel, Shadow of the Hare, traces the journey of Malia Poole beginning at the exact point in time and space that the protagonist of her first installation, Way of the Serpent, encountered a distant relative. Malia is an introspective dissident, author, and member of an underground society of creative artists. The powerful ruling plutocrats attempt to subdue these traditionalist enclaves through a coordinated sweep of their performance and art spaces. Many are killed and captured while others are forced into hiding. Refusing the anti-aging treatments sponsored by the plutocrats, Malia spends a large part of her natural life in self-imposed exile, while continuing a quest to reunite with those scattered artists from her past who may have survived the “cleansing”.

In the tradition of Bradbury, Asimov, and Le Guin, Shadow of the Hare goes beyond sci-fi into the study of human interaction while staying true to the conceptual rigors required of the genre. In truth, this is the life story of a woman passionate about her art who is desperate to hold on to a way of life that has lost all meaning to a materialistic society brainwashed into sterile consumerism. The reader gets insight into the various fractious factions living in self-contained communities and how they interact with each other while shunning the governing plutocrats.

Though this is a series, each installment stands alone as one individual’s journey through the culture of our future as it seems to be heading. The primary characters as well as the social structure of this future economy are fully and intimately developed. Birdwell makes it terrifyingly simple to slip into the cultural fragment most suited to our personality. This is accomplished by projecting us from our current situation into the often obvious direction we are headed.

One of the most frightening aspect of Birdwell’s story is how accurately and honestly she projects today’s socioeconomic and political reality into the 22nd century. In the words of Dr. Steve J Zani, “Dystopian literature is at its finest when it’s actually utopian in nature.” Birdwell has achieved this to the highest degree possible. This terrifying prophecy is a must read for anyone who has any hope for humanity. Unplug your corporate media machine and read this book!

Tony Burnett has been a member of the Writers’ League of Texas since 2010 and currently serves on the Board of Directors. His recent story collection, Southern Gentlemen, has been receiving positive reviews. He resides with his trophy bride, Robin, deep in the heart of Texas.

One thought on “MEMBERS REVIEW: Shadow of the Hare: Recall Chronicles Vol. II”