LIVING WITH THE LIVING DEAD 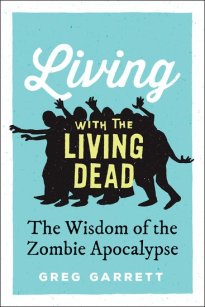 Greg Garrett has a message for you. It’s an important message. It’s a complex message, and it contains details that might possibly make you uncomfortable. It’s also the kind of message that you find buried beneath the pop-culture noise of modern superhero discourse and infotainment. This discourse is also where Garrett discovered the secret to unraveling the complexities of the message.

Although I don’t completely agree with Garrett that our social system is teetering on the brink of collapse, I do agree with that the public worldview of our political and social stability has taken on a negative connotation. In Living With the Living Dead: The Wisdom of the Zombie Apocalypse, we are given examples of how, through the ages, the spirits of the dead become prevalent in arts and entertainment when our social fabric is stretched thin by war, pandemic, or any tragedy of international scale.

Garrett successfully develops a cohesive hypothesis concerning the collapse of social stability by merging his views with those of such luminaries as Bertrand Russell, Thomas Merton, Reinhold Niebuhr, and the Dalai Lama. Although Garrett’s academic credentials are based in the tenets of Christianity, he deserves credit for taking this exploration through not only other religions, but giving credence to the atheist viewpoint and the cultural influence of literature and other popular storytelling genres such as television and movies. Garrett also uses a multifaceted approach to dissect the concept of the Zombie Apocalypse, and reveal the lessons we can learn.

How do zombie stories create or destroy community? How does the stress and desperation push us to examine the limitations of our morality? How do we make life-and-death decisions? How can we respond when there are no “right” answers? This is a brilliant exploration of how we confront apocalyptic tragedy and what becomes of us as we do. He also explores our culture from the zombie’s perspective such as this quote from Evan Calder-Williams, “Are we doomed to consume forever without enjoyment or awareness? Can we break free from the cycle of un-living?”

Living With the Living Dead is not a summer beach read, but if you are seeking answers to important philosophical quandaries in an environment of pop cultural overstimulation, this will be worth the time.

At the very least, you’ll be able to binge watch The Walking Dead and Game of Thrones with a renewed appreciation for the subtleties of storytelling.

Tony Burnett is Board President of the Writers’ League of Texas and the managing editor of Kallisto Gaia Press. His poetry and short fiction have been published in multiple national literary journals. He makes his home in rural central Texas with his trophy wife, Robin.