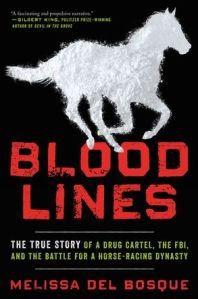 Published in September 2017 by Ecco

In this suspenseful nonfiction book, Melissa del Bosque details the true story of a Mexican drug cartel and the FBI’s pursuit.

In December 2009, a young Special FBI Agent, Scott Lawson, arrived at his assigned post in Laredo, Texas, far from his home in Tennessee. He was already trained at the FBI’s academy in Quantico, Virginia, for his new job on the Texas/Mexico border. In Laredo, Lawson soon discovered that the FBI competed with other arms of federal law: the DEA (Drug Enforcement Administration) at the top of the ladder, and Homeland Security Investigations. The FBI fell in the middle of the pecking order.

Lawson’s Laredo FBI supervisor, David Villarreal, briefed him on the focus of their team: the Mexican drug smuggling cartel known as the Zetas, especially the Treviño brothers, Miguel and Omar. Miguel had a “reputation as a sadistic, cold-blooded killer whose appetite for violence verged on the psychotic.” Another brother, Jose Treviño, was also involved.

As an up and coming member of the Zetas, Miguel Trevino had already been investing in quarter horse racing, a sign of his status in the drug cartel world. His horse, Tempting Dash, had been winning races in Mexico and was now about to be entered in the Dash for Cash Futurity at the Lone Star Park racetrack in Grand Prairie, Texas, which had a $450,000 purse. Horse racing in the United States seemed an excellent way to launder the huge amounts of cash the drug trade brought in.  Miguel’s horse agent, Ramiro Villareal, would take Tempting Dash to the Grand Prairie race, and if he won, pose as the horse’s owner.

Even though political changes in Mexico tried to end government corruption and bribery, cartels were already firmly entrenched. “The Zetas were a multibillion dollar, transnational business;” the Treviños needed investments other than casinos, bars and coal mines. Their love of horse racing was the ideal way to put money in U.S. banks “where it would be safe from …enemies.”

In order to infiltrate the Treviños’ horse racing enterprise in the U.S., Lawson was put in touch with a legitimate quarter horse breeder outside Austin, Texas who boarded, bred and trained some of the Treviños’ horses, including Tempting Dash. His name was Tyler Graham, and because he had inadvertently taken on the Treviños’ horses, he was drawn into helping the FBI in exchange for their protection.

Del Bosque chronicles the rapid expansion of the Treviño brothers horse racing from Texas to New Mexico and even into California where through bribery, horse doping, intimidation and murder, their racing wins ballooned until it all started falling apart in 2013 and 2015 with the arrests of Jose Treviño, who was operating a horse ranch in Oklahoma, and other principals in the case. Miguel and Omar Treviño are currently being held in a maximum security prison outside Mexico City.

This thoroughly documented book is important reading because it shows how the Mexican cartels started and how they multiply and grow more savage in their thirst for money and power.

—
Mary Pritchard is currently an adjunct instructor at Tarrant County College SE.  She has written poetry all her life, and is now working on a memoir that is based on her mother’s letters to her from the last half of the 1950s.  She also enjoys watercolor painting and photography.  She was raised in the Panhandle of Texas, and that landscape is part of her soul.