“The League’s a place for anyone—regardless of skill level— who wants to write. It’s also perfect for people who want to be a part of and supportive of the literary community.”

A member of the Writers’ League for six years and the WLT’s board president, Rodney lives in Austin, Texas. 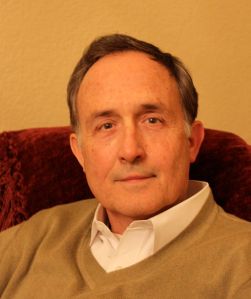 Scribe: In what genre(s) do you write?

Scribe: What author would you most like to have a drink with, and what’s the first question you would ask them?

RS: Tough question since I like so many. If I had to choose just one, then it’d probably be Norman Mailer. Here’s why. I heard him lecture at the University of Texas years ago. There I saw a hunched-over figure hobble to a stool at center stage, then start to speak. In an instant, the atmosphere in the hall seemed to morph from black and white to Technicolor. For an hour, the audience was spellbound. How was it possible that voice and those ideas could come from a man who seemed so frail? His time on stage was much too short for most of us. I’d ask him to say more about the craft of creative non-fiction.

Scribe: If you were stranded on a deserted island, what book would you want to have with you to keep you sane?

RS: The Complete Poetical Works of Wordsworth. Weird, huh? Let me explain. I’ve been a fan of the early romantic poets since my youth as a Bandera small-town “library kid.” Knowing that, my oldest brother gave me the book on my 21st birthday. A younger brother—and then still others—joined the cause and gifted me more volumes of poetry from that era — the works of Burns, Scott, Shelly, and Tennyson. Now, many, many years later, I still haven’t finished reading Wordsworth. Time alone on a deserted island might be what I need to get the job done.

Scribe: What have you learned from your association with the Writers’ League?

RS: The League’s a place for anyone—regardless of skill level— who wants to write. It’s also perfect for people who want to be a part of and supportive of the literary community.

Scribe: Where do you see your writing taking you (or you taking it) in the future?

RS: I’d like to publish what I’ve written. To this point, I haven’t been especially hung-up on seeing my work in print, but recently my wife, Marcy, along with a good friend who both know I’ve labored for years to complete my first novel, gave me a swift kick in the pants. They each reminded me that finishing is the critical part of any project. Ouch! Guess I’d better hop to it. It’s high time I send some queries.

Scribe: Here at the Writers’ League, we love sharing book recommendations. What’s one Texas-related book that has come out within the past year that you couldn’t put down?

RS: Simply this: I stumbled onto the WLT six years ago when my family enrolled me in a creative writing class. Their Father’s Day card read something like this: “Put down the rake and pick up a pen. You have some work ahead of you!” The experience was transformative because it’s where I found a welcoming and nurturing world of writers. Now, six years later, I’m the League’s board president. Who would have guessed such a thoughtful gift could have such an impact? I think anyone who writes—or dreams of writing—belongs in the Writers’ League.

If you’re a Writers’ League member and you’d be interested in being interviewed for our Meet the Members feature, email us at member@writersleague.org for more information. It’s a great way for other members to get to know you and for you to share a bit about what you’re working on!