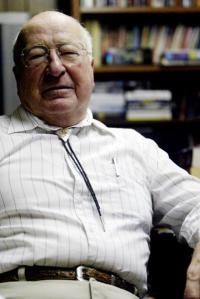 Elmer Kelton, one of Texas’ most prolific and beloved authors, passed away on Saturday. Here’s a link to the story in the San Angelo Standard-Times.

He was the author of more than 40 books, including The Time it Never Rained, The Wolf and the Buffalo, The Day the Cowboys Quit, and The Good Old Boys, which became a TV movie directed by and starring Tommy Lee Jones. Kelton was named the number-one Western writer of all time by the Western Writers of America and won seven WWA Spur Awards. The Texas Book Festival honored Mr. Kelton in 2003 with the Bookend Award.

The family requests that donations be made to the giver’s favorite charity or the Tom Green County Library’s Elmer Kelton statue fund through the San Angelo Area Foundation at 2201 Sherwood Way, Suite 205, San Angelo, TX 76901-3081.

Error: Twitter did not respond. Please wait a few minutes and refresh this page.