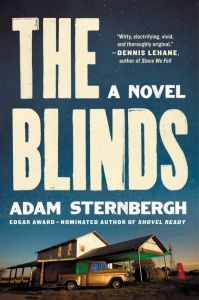 Published in August 2017 by Kensington Books

In The Blinds, Adam Sternbergh tells an intriguing story about the residents of a town called Caesura, Texas. Caesura is an extremely small community of individuals who try to live normal and relatively peaceful lives. However, Caesura is not like other towns — it is isolated and located in a remote part of Texas, where communications with the outside world are virtually non-existent.

As the story progresses, the reader is introduced to residents in the town whose personalities range from friendly and sociable, to odd and reclusive. With the exception of the mysterious presence of a sheriff and two deputies, the residents of Caesura have some memories of their past lives, but they do not remember the circumstances that led them there. They do not know their real names, and they are told to choose new names and identities. All of their food and supplies are shipped to them in a delivery truck. In a community of strangers where everyone has a questionable past, the town is a refuge from the outside world. They are free to leave Caesura, but they can never return.

In this novel, the knowledge of their past actions is something that the residents both seek and fear. As one character states, “It’s hard enough to live with what you’ve done. It’s immeasurably harder to live with knowing you’ve done something, but not knowing what exactly it is you did.” The reader learns about the backgrounds of characters whose pasts are as varied and diverse as their new names. Sternbergh explores the emotional struggles of these characters, but he also allows the reader to come to his or her own conclusions.

As the tale unfolds, horrible incidents occur in the town. A man is found murdered in a bar. A shop is vandalized for no apparent reason. Residents of the town begin to fear the worst as the town becomes as unsafe as the world beyond it. When the reader least expects it, secrets are revealed and more crimes are committed. The story morphs into the ultimate page-turner that forces the reader to reach a shocking but familiar conclusion: people can leave the world they know, but they may never truly escape their past.

—
Amanda Moore is an attorney and writer living in Austin, Texas.  She won first place in the Texas Bar Journal 2015 Short Story Contest and was asked to return as a judge in the annual competition for two consecutive years. She has been a member of the Writers’ League of Texas since 2014.  Amanda is an avid reader and book aficionado.